The color code, as originally introduced by Jeff Cooper, had nothing to do with tactical situations or alertness levels, but rather with one’s state of mind. As taught by Cooper, it relates to the degree of peril you are willing to do something about and which allows you to move from one level of mindset to another to enable you to properly handle a given situation. Cooper did not claim to have invented anything in particular with the color code, but he was apparently the first to use it as an indication of mental state. 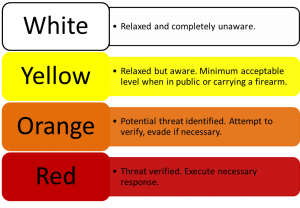 White: Unaware and unprepared. If attacked in Condition White, the only thing that may save you is the inadequacy or ineptitude of your attacker. When confronted by something nasty, your reaction will probably be “Oh my! This can’t be happening to me.”
Yellow: Relaxed alert. No specific threat situation. Your mindset is that “today could be the day I may have to defend myself”. You are simply aware that the world is a potentially unfriendly place and that you are prepared to defend yourself, if necessary. You use your eyes and ears, and realize that “I may have to shoot today”. You don’t have to be armed in this state, but if you are armed you should be in Condition Yellow. You should always be in Yellow whenever you are in unfamiliar surroundings or among people you don’t know. You can remain in Yellow for long periods, as long as you are able to “Watch your six.” (In aviation 12 o’clock refers to the direction in front of the aircraft’s nose. Six o’clock is the blind spot behind the pilot.) In Yellow, you are “taking in” surrounding information in a relaxed but alert manner, like a continuous 360 degree radar sweep. As Cooper put it, “I might have to shoot.”

Orange: Specific alert. Something is not quite right and has your attention. Your radar has picked up a specific alert. You shift your primary focus to determine if there is a threat (but you do not drop your six). Your mindset shifts to “I may have to shoot that person today”, focusing on the specific target which has caused the escalation in alert status. In Condition Orange, you set a mental trigger: “If that person does “X”, I will need to stop them”. Your pistol usually remains holstered in this state. Staying in Orange can be a bit of a mental strain, but you can stay in it for as long as you need to. If the threat proves to be nothing, you shift back to Condition Yellow.

Red: Condition Red is fight. Your mental trigger (established back in Condition Orange) has been tripped. “If ‘X’ happens I will shoot that person” — ‘X’ has happened, the fight is on.